Your Church’s Mission: Remaining Effective in a Changing World 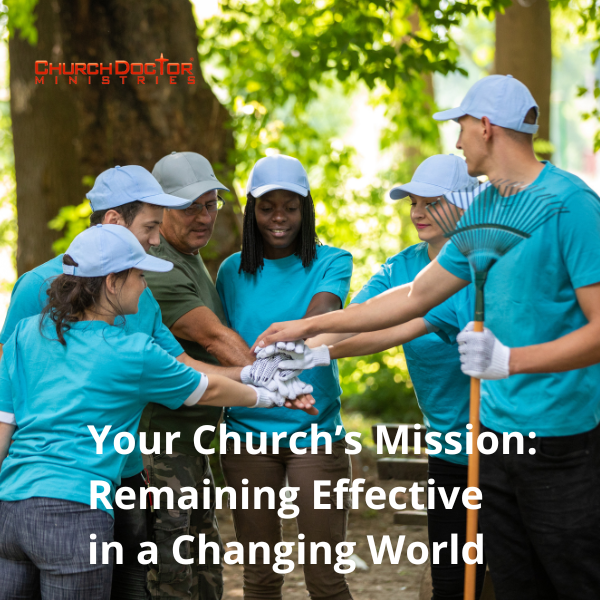 This statement says it all: “The only person who likes change is a baby with a wet diaper.” It’s a universal reality: Change is hard, good change is necessary, and change that is good focuses on style—NOT substance.

As COVID-19 took over the world like an evil storm, churches everywhere had to adapt. There may not be a Christ-follower on Earth who escaped the change in how to “do” church—streaming worship services, online giving, communion at home or in spaced-out sanctuary seating, hand sanitizer everywhere, the drinking fountain turned off, no handshakes, masks everywhere, smiles hidden, and hugs forbidden.

What did we learn? We had a big reminder that even young and healthy people can die. Life is fragile—more jeopardized than most of us ever thought. We learned you can do church differently. You can change the way you do life. Some discovered that a few things we were forced to change (maybe—post-COVID—the new way we had to do it) were better than the way we used to do it.

Recently, I had a conversation with a pastor in the Midwestern United States. He wanted some advice about change and church. Mostly, he wanted someone who would listen to him unload his frustrations.

This pastor’s frustration centered on “the way we do communion.” A few of the older members were feeling liberated from the COVID shutdown and wanted to reinstate “the way we’ve always done it.” During the pandemic, the church had services with scattered seating. Their history was to have communion every Sunday, so they continued to follow that pattern. However, individual cups and wafers were provided at the entrance to the sanctuary. Worshipers would take communion at their seats. This COVID-forced change had a silver lining. It took far less time than the traditional approach, where people would be ushered to the front, kneel in groups, receive the elements, be dismissed, and head back to their seats. In the pandemic approach, there was more time for preaching and worship.

Now there is a group pressing the pastor to revive the previous system. Yet, others have adapted and feel the worship time is more meaningful without “all the time spent parading to the front.” What is a pastor and leader to do? What is the real issue behind the issue? How does that issue impact the effectiveness of the mission?

It is perhaps valuable to consider the context of how, when, and where Jesus instituted—and modeled—what has become known as “the Lord’s Supper.” It was a meal around a table. In Matthew 26:26-28, it begins, “now as they were eating….” Jesus provided this new blessing called “the Lord’s Supper” in the middle of a meal! Of course, that doesn’t mean you have to have a potluck to provide communion.

In Luke 22:14-21, the Scripture actually reverses the supper, with the cup first and the bread afterward!

Paul writes to the Corinthian church (1 Corinthians 11:23-25), “For I receive from the Lord what I also deliver to you, that the Lord Jesus, on the night he was betrayed, took bread, and when he had given thanks, he broke it and said, ‘This is my body, which is for you; do this in remembrance of me.’ In the same way, he also took the cup after the supper, saying, ‘This cup is the new covenant in my blood.’” Get that? Paul puts supper in between the bread and the cup!

The point? It’s not the style that counts. You can have communion during a meal. You can follow Matthew’s bread first, cup second, or Luke: cup first, bread second. It’s amazing how so many church people get fixated on style, rather than substance!

A Suit and Tie Challenge

Recently, I was asked to take a small part in a funeral in which the deceased and his surviving wife have been longtime friends of our family. The wife of the deceased asked the pastor, specifically, that he wear robes and that other participants wear suits and ties.

It was an interesting wake-up call for me. In all my work with churches, I can’t even remember the last time I wore a suit and tie! I gladly responded to the spouse’s wish, but I had two revelations.

I don’t consider myself to be a rebel, on the one hand, or a clothes specialist, on the other. In truth, I don’t think much about style. I focus most of my energy on substance. Why? It’s what Jesus did!

The challenge is clear: The culture constantly changes. The fact that Jesus came in the flesh and looked like the people around him is a clear signal about what missionaries call contextualization. The incarnation, Jesus becoming flesh, is a clear and unmistakable signal that Christians should try to fit the culture they are called to reach, as long as it doesn’t drift from scriptural truth. I knew there would be many older people in the funeral crowd, and, for many of them, a suit and tie may be a signal of respect. Missionaries call this “indigenous sensitivity.” Without ever compromising the substance of scripture, you remove as many barriers of style that could roadblock the most important Good News that anyone could ever hear. Why did I wear the suit and tie? Because Jesus came to Earth looking like one of us.

Sometimes cultural issues prepare a clear path for the powerful message of the Good News about Jesus. But cultural issues change. It is never appropriate to water down the truth of Scripture and accept the behaviors or customs that are contrary to Scripture. That is called syncretism—syncing up with everything in the culture in an attempt to get more people in church. It also, eventually, doesn’t work. Even unbelievers respect substance and commitment.

However, there are many cultural issues that are not related to biblical truth. Dress codes change over time. They are different in various cultures. I respect the Amish and their commitment to their beliefs, but they will never launch an effective movement to reach the rest of the world for Jesus.

Cultural roadblocks can greatly hinder Jesus’ commission to reach the world He died to save. There are so many older churches that were built in North America, patterned after European styles of architecture. In this country, these older buildings send a message every Christian would never want to send to their unchurched neighbors: “Christianity—maybe even Jesus—is out-of-date, irrelevant, and foreign.”

The doctrine—the teaching—of Scripture is an offense to our sin. It calls us to change—repent. Yet that doesn’t give believers the right to be offensive about the love of Jesus. No Christian wants to be the roadblock to an unbeliever on the path to eternity, even if it includes your warm, fuzzy, archaic approaches—the way we’ve always done it!

When I was in mission school, I had the amazing privilege of knowing three of the most profound and influential teachers of missiology in the world. They will be household names in mission circles for a long time. They have since gone on to be with the Lord, but their imprint on effective mission work will live on. Those three men—Donald McGavran, Peter Wagner, and John Wimber—imprinted me and thousands of others around the world.

One day in class, Peter Wagner shared the story of the mission attempt to bring Christ to the indigenous Kiowa tribe in the early days of America. It is the story of “failure to contextualize” the Good News of Jesus.

The missionaries meant well. (So do many church leaders who cling to worn-out containers to carry the always fresh, powerful news of the Gospel.) They were dedicated and “orthodox”—committed to biblical truth. The challenge was to their blindness to the Kiowa culture. When they shared the Good News about Jesus, they “dressed” it in foreign containers—and, unintentionally, roadblocked the context.

Here’s the backstory: The Kiowa were at first very receptive to the “white man’s religion.” They were eager to learn about Jesus who forgives wrongs, brings peace, and promises eternity. They could feel the love of the missionaries who introduced them to the Good News. They could tell: Jesus had changed their lives, and that’s why they were motivated to bring that miracle to the Kiowa tribe.

As the Kiowa responded to the Holy Spirit through the powerful Gospel, the missionaries felt their next step was to organize them to build a church so they could worship. The whole tribe enthusiastically came together to build this worship structure.

When the facility was ready, the time approached to have the first worship service. As the Kiowa realized this was the “house of God,” they began to question, “Does your God need a house?” “Can’t we worship Him on the mountain or the hillside?” The missionaries made it clear: “The place to find Jesus is in the house of God!”

Finally, the celebration day arrived. The worship service was prepared. The building was ready. As the Kiowa tribesmen entered the church, they saw their first picture of Jesus: a large painting hung on the wall. There was Jesus, long hair, flowing robe, preaching on the hillside! History records: The Kiowa tribe was never reached—at that time—for Christ. The mission was a spiritual failure of eternal proportions.

Think about yourself—as an ambassador for Christ. Think about the people you know who are far from God, far from eternity with Jesus. Are you part of the solution or part of the challenge? What is God saying to you? To your church? And, what are you going to do about it?