Worship That Connects: How, to Whom, and Why?

On Sundays after church, my wife and I occasionally go out to lunch. Sometimes we eat at the local Culver’s restaurant. I found it interesting that they play Christian music in the background.

I’m a trained missiologist: an enthusiast for reaching lost people for Jesus. I am also a diagnostician, focused on how we reach unbelievers effectively. So, my mind immediately asked, “What kind of Christian music?” The answer? Contemporary. Smart! Why?

In mission terminology, this is the power of contextualization. From the perspective of Scripture, God showed up in the flesh. Jesus was born in Israel — the “promised land.” He was a Jew among Jews. He looked like a Jew, talked like a Jew, ate like a Jew. He fit the context. Why? God is serious about reaching people where they are. Why? The whole plan is about the salvation of lost people far from the God who created them. He loves them and sent His Son — who gave His life for them.

So, what was Jesus’ greatest obstacle? The question isn’t what, but who. His challenge was the religious people — the scribes and the Pharisees. What was their issue? Jesus didn’t do it “the way we’re used to doing it.” So, they killed Him. Failure to believe in Jesus kills people, eternally. Failure to contextualize His message kills His Church.

The Pharisee named Saul was blinded by the religion — the habits that are helpful carriers of God’s movement, but change for each season, culture, generation, and language. Saul missed the faith, the person of Jesus. He couldn’t see God’s gift. Saul was too focused on the packaging. He missed Jesus until Jesus met him on the road to Damascus. Saul was blind to the incarnation: the extent God would go to get His salvation gift to lost people — no matter what package it would take. Eventually, Saul, now Paul, got it. The proof? He writes, “So I became all things to all men, that I may save some of them by whatever means are possible” (1 Corinthians 9:22b Today’s English Version). Contextualization matters!

There is a brilliant saying, “A text without a context is a pretext.” It is presumptuous — even rude — to present the Good News of Jesus Christ in packaging that is foreign, strange, and irrelevant to the unbelievers you are trying to reach. It leans toward idolatry; it elevates the form above the substance of faith. It kills churches — and the Christian movement. “But, we’ve always done it that way!”

To be clear, erosion of God’s Truth, the Scripture, renders the power of the Gospel impotent for salvation. The value of Scripture is nonnegotiable and can never reach lost people by being “watered down.” Surely, “Christianity lite” guts the power of the Christian movement. However, equally dangerous is the practice of perpetuating “feel-good” delivery systems that no longer speak the heart language of those you are trying to reach. (Now, before you get offended, honor the context of this vital issue.)

The Decline of the American Christian Movement

Just before Easter 2021, the Gallup organization released a graphic of research that ought to get the attention of every believer in Jesus Christ in the U.S. This research began in 1937. Gallup phones a large sampling of Americans every few years to ask, “Do you happen to be a member of a church, synagogue, or mosque?” (emphasis mine).

A graph is a picture worth a thousand words: 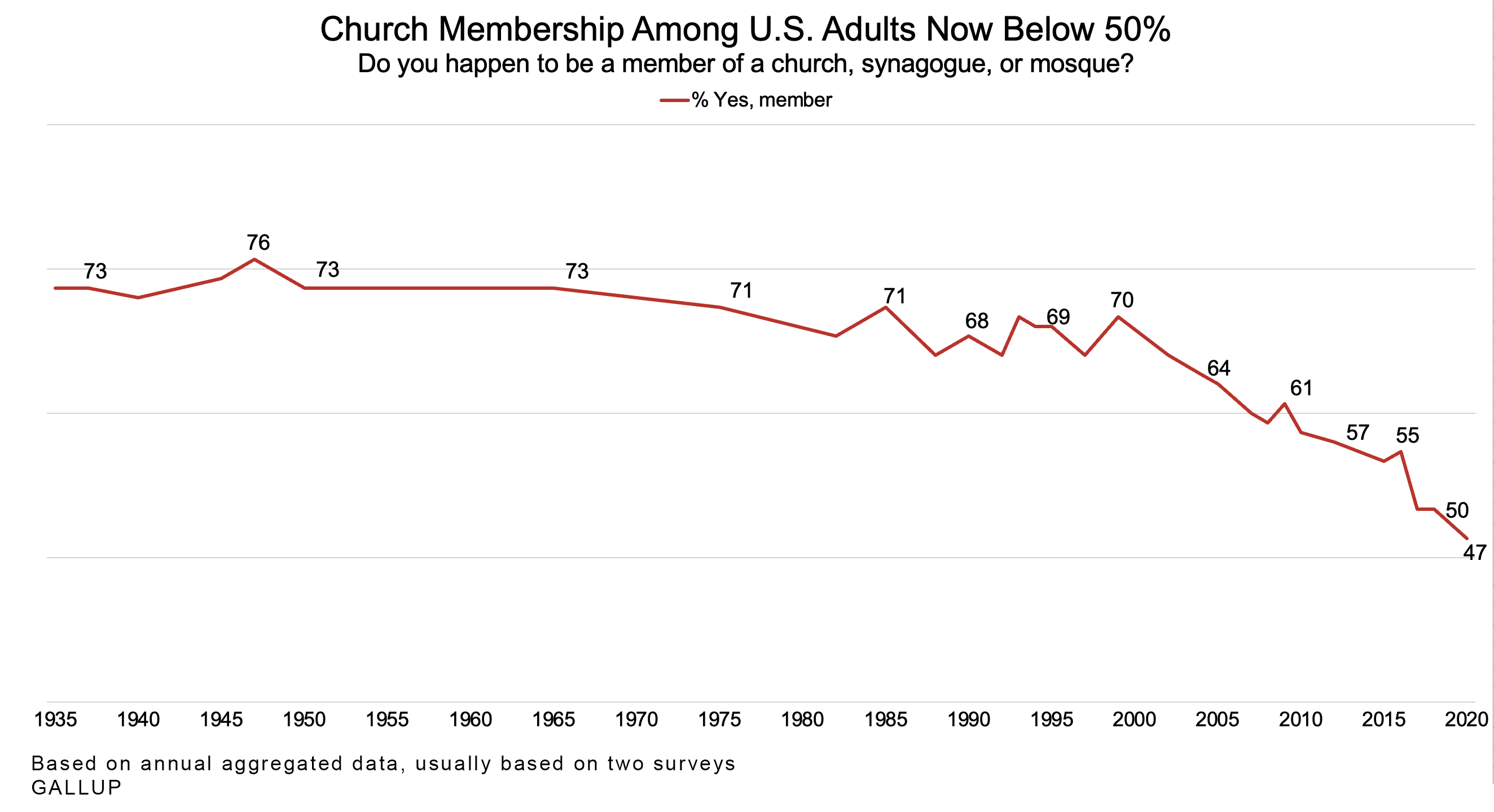 As you can see, those who claim membership in a church, synagogue, or mosque (regardless of whether they actually attend or how often they attend) has decreased to less than 50 percent for the first time since Gallup began this research. Does this get your attention? There are several key issues church people need to address. One of them is contextualizing the unchanging faith.

What Makes a Context?

There are critics who would claim that some attempts at contextualized ministry are “entertainment.” That view may be accurate for some churches. The appropriate litmus test, however, must always be the content, not the delivery system. Indeed, if the content is “Christianity lite,” that is an accurate challenge. However, a church with limited theological content in worship (sometimes called a “seeker-sensitive service”) may have deeper teaching in follow-up small group Bible studies. It is a fact: Some churches have gone the entertainment route and lost the central meaning of Christianity. They eventually die from weak biblical content.

When I was a young student in college preparing for the ministry, I already had a passion for mission. I wanted to reach people who were not Christians or who had drifted from the faith. When my denomination released a film to raise money for overseas mission work, I was intrigued. As I watched with enthusiasm, the film showed a missionary pastor teaching half-naked children sitting under a palm tree in some jungle. However, the pastor was standing and wearing a long black cassock, covered by a white surplice, and underneath had a black shirt with a plastic white collar around his neck. Even though I had no training in mission at the time, I clearly saw the disconnect between that pastor and those little children. He had two disconnects: foreign clothes and he was standing above them. Oswald Chambers in his book My Utmost for His Highest wrote, “Beware of posing as a profound person — God became a baby” (November 22 devotion).

Mission work is about effectively reaching unbelievers for Jesus and discipling them into Christ-followers who reach others. Jesus left heaven to become like us. It is called the “incarnation” which, technically, means “like meat” — in the flesh. The most effective approach to reach another person for Jesus is called “indigenous.” It is “being like,” “inherent” — not foreign or weird. Unfortunately, many American churches are indigenous to a target unchurched audience that has been dead for 300 or 400 years.

A good example is the Lord’s Prayer. Based on Jesus’ example in Matthew 6:9-13, many churches follow translations of this prayer that use language no longer relevant for today: “Thy Kingdom come,” for example. If you are married, what response would you get if, before you went to sleep, you whispered to your spouse, “Thou art my very best friend”? For many who grew up in the church, this is “feel-good” language. For an unbeliever searching for God, it sends a message: “God is out-of-date, irrelevant, and foreign.”

Before you “crucify” this Church Doctor, look at the context of Jesus’ message in Matthew 6. In verse 7, just before the Lord’s Prayer, Jesus gives the background for His prayer recommendation: “And in praying do not heap up empty phrases as the Gentiles do; for they think they will be heard for their many words” (Revised Standard Version).

“Why do Christians use out-of-date language, styles, musical instruments, seating choices, signs, communication systems, decision-making styles, and architecture reflecting another century and another continent? These are real and serious barriers to your neighbor. Do you really want to communicate that Jesus is an out-of-date, irrelevant foreigner?”
~ Who Broke My Church? (p. 145)

Many pastors understand the contextual challenges. Their longtime church members grew up with forms that became “feel-good” containers for the faith: words like Thy, pews, pipe organs, clerical dress codes, and 16th century favorite hymns. They are vehicles of faith. Since your faith is close to your seat of emotions, it is a challenge to “think like a missionary.” The result? Many long-term members of the church lament that their adult children no longer attend church. Some have grandchildren who have never been baptized. I know this, because I have interviewed thousands of people while conducting church consultations. Many share stories of their unchurched adult children, and they actually start crying as they express their pain.

In the book (and movie) called Water for Elephants, a trainer is assigned to a new elephant that did not respond to his commands. He concluded, “This is one stupid elephant.” A different trainer took over. He researched the history of that elephant and discovered it came from a different country and didn’t know the English language.

Most Christian leaders consider the challenge for their church to be that people don’t like change. Yet, if you look at the parking lot at church, few are driving cars that were made more than 20 years ago. Or, for that matter, few women wear hats in church anymore. Few men wear suits and ties — even to “traditional” worship services.

The diagnosis of these real challenges has eluded many churches and several whole denominations. Not to oversimplify, but there are two key areas. First, many Christians have never caught the basic dynamics of mission thinking. Their pastors and staff have never taught them basic “missiology”: biblical basics of effective outreach to unchurched people. (The exception is those who feel called to a foreign mission field.) Yet, it is not the fault of church leaders. Most training institutions do not teach mission strategies to North American pastors. This absence of missiology is based on a limited perception: “The mission field is ‘over there’ somewhere.” It reflects a conclusion that has never been totally accurate: “We are a Christian nation.”

The second key area for church leaders and members is a limited view of worship styles. In history, denominations would print worship materials — like hymnals — that imply “this is the way our group worships.” With the significant erosion of denominational influence today, many church leaders have concluded that the unchanging content (theology) can be presented in a variety of forms. This has led to a variety of worship services in many churches. It is the same biblical content, “packaged” in different, contextualized formats. A further extension of this approach includes different physical settings: some in the church building and others set in marketplace venues, like the local YMCA, a coffee shop, or house churches.

This proliferation of settings and styles, directed toward contextualizing the same biblical content, reflects the pattern of the New Testament church. It also mirrors movements in history when Christianity has greatly impacted areas of the world. It demonstrates the passion and approach of the New Testament church, summarized by the Apostle Paul, “I have become all things to all people so that by all possible means I might save some” (1 Corinthians 9:22, New International Version).

A text without a context is a pretext.