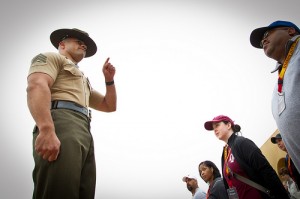 Did you ever hear the Christian hymn, “Onward Christian Soldiers,” at church? What it doesn’t say implies something the church today needs to re-learn: Generals do not win a war; armies do. Likewise, pastors will not “win the world;” Christians will. Their marching orders are to introduce the benefits of Christianity to as many people as possible. It’s not a war of “death” but of “life.” But the strategy is very similar.

Every good army needs leaders. They’re called generals. They give direction, provide strategy, and equip the troops. These generals are highly trained, very experienced, and especially called to the role of leadership. But, without the masses—the troops—they accomplish very little.

The modern Christian church has drifted from the biblical model. It is one of the reasons Christianity is losing ground—losing the war. Churches focus almost entirely on highly trained generals. They are called pastors. They are important. I know; I have been one. I have also trained many of them. But, alone, they, (we), will never get the job done.

When someone feels God is calling him or her to ministry, the first response is often, “Go to a Bible college or seminary”; “get ordained.” Depending on the system, this takes four to eight years, and the cost is often hundreds of thousands of dollars. For many, it requires uprooting their families and moving to an educational institution. It often pulls people out of everyday activity in the church and puts them in an academic institutional setting. This is the right call for generals. But if it’s the only approach, or even the main approach, it will continue to contribute to the decline of Christianity.

The church needs an army. Armies are raised quickly, in fast-paced boot camp training on the essentials needed to operate on the front lines. These soldiers need the leadership and guidelines of the generals, but they don’t need to become generals. They need short burst, hands-on, inexpensive training. They need to be deployed, not by the hundreds, but by the hundreds of thousands. They need to be trained in boot camp, short-term training centers close to home, like SEND North America in Kendallville, Indiana.

There are three potential armies that God could raise up and deploy through churches around North America. They would revolutionize and revitalize the Christian movement.

Someone once said: “It takes a village to raise a child.” God knows, it takes an army to change the world.

How is your church raising up and deploying armies of Christian soldiers? We welcome your comments below.

Kent Hunter is known as the Church Doctor. His most recent e-books are The Future Is Now and The J-Dog Journey, available at no cost. Contact him at (800) 626-8515, or you can visit www.churchdoctor.org.