The Power of Intervention 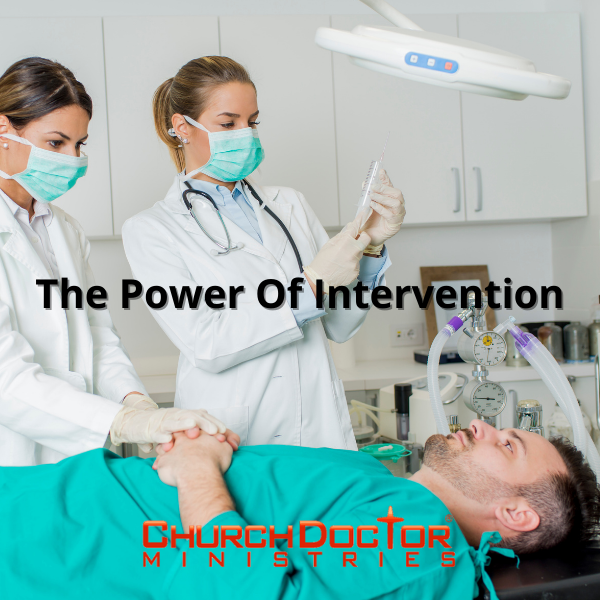 Last month I finally caved in. My head had been congested for three weeks, and I wasn’t getting any better, so I went to see my doctor. He asked me some questions. (That’s called diagnosis.) Then he told me, “It sounds like you have a sinus infection.” (That’s called prognosis.) He, then, told his phone nurse to call the pharmacy and order some antibiotics for me. (That’s called a prescription.)

The end result? (1) I feel a lot better. (2) I’m much more productive—in every area of my life. (3) I’m annoyed with myself because I waited so long to get help. (That’s called foolish procrastination!)

Early on in the Old Testament, God intervened in the world: He created. He was there when Adam and Eve came into being. That’s why we are called human beings.

But that’s not all. God was there, intervening throughout ancient history—through Moses, Elijah, a burning bush, all sorts of ways. Even with a flood—and a huge boat. (If you haven’t seen the ark replica in the Midwest, you need to see it—and go through it. It will blow your mind!)

In ancient times, it was amazing—all the ways God worked through intervention. Did you ever wonder if He made a mistake along the way? Did He ever perform an intervention that He would later regret like the slavery in Egypt? Or what about the Romans occupying the Holy Land, which God had promised to His people? What was He thinking? Why would Jesus be born into that mess?

Maybe you think, was God sleeping at the switch when the breakout of COVID-19 occurred? What about all those people who died? Doesn’t He know that wearing a mask for a couple of years is a pain in the—face? Am I the only one who questions God about not seeing another person smile at me for two years? What about when I smile to be nice to another person and then remember: THEY CAN’T SEE MY FACE!

We get anxious, upset—even blame God. We ask hard questions. Why does it seem like the world is going to hell? Why all the stress? The violence? The politics? The unrest? The division? What about the decline of faith? The closing of churches? The aging of congregational membership? The loss of a big portion of younger generations, drifting from faith?

Yet, you have to wonder: Does this stuff represent the problems? Or are they symptoms? Good doctors are focused on the issues behind the issues. The causative stuff. The root, not just the fruit.

Holy intervention doesn’t always make sense. Jesus enters the world of the Holy Land when things were hardly holy. God’s special landing place for Jesus is occupied! His people are terrified. His religious leaders are mystified. Nobody, almost nobody got it. Those people from the Roman Empire crucified people. They taxed God’s people and sent the cash to a pagan emperor. God’s timing for Jesus? What was He thinking?

Not what was He thinking, but how He was thinking. His thinking is holy. Honestly, it’s not the way most people think. Sometimes it’s not even the way Christ-followers think.

You probably have heard it before: “When things are at their worst, God is at His best.” What is that about? It’s about holy intervention.

So, Jesus brings Heaven when God’s people think the world is going to hell. This is holy intervention. It works because of holy disruption. God doesn’t cause the disruption. We do that. He allows it because it makes us more receptive: to faith, to Him.

This is what we described in the book Who Broke My Church? It’s why Christianity flourished in the Mediterranean world, then waned. I recently got back from Egypt. At one time, it was a Christian nation, where the Eastern Orthodox Church—called the Coptic Church in Egypt—flourished. Today, Egypt is primarily Muslim. You hear the call to prayer several times a day, everywhere you go.

Yet, in many nations—south of the Sahara Desert—Africa is exploding with the Christian movement. It is really booming: among the poor, the disenfranchised, the struggling. Yes, God has their attention. Most of them have lived their lives in holy disruption.

The Health of Your Church

If your church is plateaued in growth, it is actually declining. If it is aging, it is dying. That is a fact. It describes many churches in the U.S., Canada, and Europe. However, there are exceptions in every place. They are beacons of light in an otherwise dark scenario. While Christians tend to ignore the symptoms—just like I ignored my sinus infection—placing your head in the sand doesn’t change reality.

Yet, when God gets the attention of a few, they can sound the alarm before it’s too late. This is why our work at Church Doctor Ministries is so rewarding. The almost 1,800 churches (and counting) that we have served have had a wake-up call—an epiphany—and they sought intervention.

My friend Jim is a brilliant businessman in northern Michigan. He came up with the name “Church Doctor.” At the time, I hadn’t realized the medical connection: diagnosis—prognosis—prescription for what Scripture calls the body of Christ—your church. And it works! The name “Church Doctor” is not just a cute idea. It describes intervention. Your church is a living organism: the body of Christ.

A look at our world reflects a massive movement of receptivity for intervention. Unbelievers—those who are far from God and those who have drifted from God—are more receptive than most Christians, even pastors, would ever believe. People without Jesus are lost. They have a spiritual illness that is killing them—for eternity. Church people have the cure. The antidote is life with Jesus.

So, what is the diagnosis? What is the disconnect? Most Christians know how to diagnose people who are far from God. Most believers are somewhat clear about the prognosis. But the methodology—the prescription—that worked “back in the day” is not always the best prescription. It’s not a theological issue. It’s a prescription issue. It’s the same “grace antibiotic”—called “Jesus.” But the way most churches administer it is like giving unbelievers a shot in the arm with a hammer.

If your church is plateaued, declining, and/or aging, you need to know: You are not far from an effective strategy. You have the prescription. You just need to know how to better administer Jesus. He is still the cure. He always was. He always will be.