The Disruption of Our World: What Would Jesus Do? 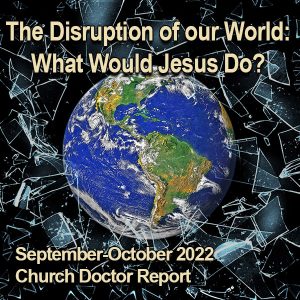 Many Christians are disturbed about numerous issues in our world today. Are you one of them? The economy is in a recession. Politics is, well, often disturbing. Gun violence is incomprehensible. Morality is a mess. Wars and rumors of wars lurk in the shadows.

Think about this: What, as a Christian, should you not do? What message should believers not promote? To say it another way, on what hill will we stand? On what hills will we not take a stand? These are great questions for followers of Jesus right now.

The Present State of the Church

It would be great if, in one sentence, paragraph, blog post, or podcast, we could summarize the state of the American church. However, Christians and their churches—along with various denominations and groups of churches—are all over the map.

There are many choices about where to take a stand. There is antiabortion. On the other side is women’s reproductive rights. There are issues pertaining to gay rights. There is the effort to repent for white privilege, even if it occurred among your ancestors. The list goes on!

Whole denominations and networks of churches have joined one “bandwagon cause” after another. For some, it is promoted as a rejuvenation of the faith: “At least we stand for something.”

Meanwhile, the Christian movement continues to decline in America—as it has in other parts of the world, such as in Europe. We were recently in Egypt, home of the Coptic church—a branch of Christianity that has connections that go back centuries to when the Jews were in captivity. Today, there are only a few Coptic churches in Egypt. The country is now primarily Muslim.

What Did Jesus Model?

If all else fails, it is a good idea to go back to your origins, the basics. Ask yourself: What do we learn from Jesus? What was the cultural, the “political” stance of the New Testament church? What got them excited? What were their priorities? What fueled the movement? What was the engine that drove the phenomenal expansion of Christianity?

Remember? Jesus was born in the “Promised Land”—Israel. Of course! Where else would He arrive? God’s promise was to the Jewish people. Israel—the Holy Land—was the landing platform for the Messiah. There was never any doubt about where the Messiah would appear.

However, did you ever wonder: “Why then?” Why did Jesus appear when the very land—promised by God Himself—was occupied by the hated—and feared—Romans? The empire taxed God’s people and sent the proceeds to a pagan ruler. How would you feel if a foreign enemy took over your country, taxed you, and crucified people—putting their horrendous deaths on display for everyone to watch? This was the context for the Messiah promised for centuries! This was the platform for the arrival of God’s Son! Was this the timing of God, who controls the universe? It would be reasonable for the Jewish people to expect Jesus to lead a movement against this atrocity—wouldn’t you think? God’s Son could have instantly become a popular king. Yet, that was not—and is not—God’s plan.

From day one in the life of Jesus, the Romans were not friendly to any competition of rulership. In Matthew 2:13-15, we learn that Herod would not accept leadership competition. He was out to kill Jesus. Mary, Joseph, and the baby left for Egypt and were there until Herod died.

Jesus and his family returned to Nazareth. When the time was right, Jesus began His earthly ministry. For the most part, the Roman soldiers considered Him harmless. Actually, a few were intrigued by His message and ministry.

It was the religious leaders—the scribes and Pharisees—who challenged Jesus. They were “denominational leaders” who had drifted away from the mission and the message. They got caught up in religion so much they drifted from the faith. Most of them rejected the message of Jesus. They lost sight of what was predicted in the Old Testament. They had their own agenda. They became master politicians with a twisted cause. Before his encounter on the road to Damascus, Saul was one of them. It took a dramatic experience for Saul to become Paul.

Saul (Paul) was a gifted leader with the wrong, twisted agenda. In Jesus, God was doing a “new thing.” Even though it was predicted, most of the religious leaders missed it. They had fallen in love with the power of control: “We’ve always done it that way!” They were trapped in a mundane agenda, focused on earthly stuff.

Jesus’ Focus on the Kingdom

There were a few people—many of them Jews—who looked to Jesus to fix the mess of Israel under Roman rule. In today’s world, they might be waving the flag against abortion, gay rights, or whatever. Surely God is concerned about these issues. However, are they the focus of Jesus’ mission, the highest priority for your church?

Well, Jesus did address the lady caught in the act of adultery. It is presented as a short discourse: “Go and sin no more.” There are a few instances of that in Scripture. However, by far, these issues are not His main agenda.

Jesus did face the question about paying taxes to Rome. His short response was, “pay Caesar what belongs to Caesar.” Most of the time Jesus focused on the issue behind all issues—sin—and its antidote, forgiveness through Jesus. And, He did change the behaviors and lifestyles of many. He still does. The issue is how. What was Jesus’ main theme? He said, “Seek first the Kingdom of God.” What does that say about our primary message?

What we hear from Jesus the most is, “The Kingdom of God is like….” He follows, using the power of story. We call them parables. They are easy to understand. Jesus’ primary message is about the Kingdom. It works like this: “Get right with God through Jesus.” That makes you a follower of the King. That gives you the power and potential for forgiveness. The Jesus approach deals with any and every malady of life. If that’s too simple for you, perhaps it’s too profound for you!

Jesus’ approach is not a political agenda or the social challenges in society. It’s more like: “Get right with Jesus—believe in Him—let the Holy Spirit empower you to deal with whatever challenges you face. Become a Kingdom person. Even though you aren’t perfect, this side of heaven, you are a child of God. You are a work in progress. Your agenda isn’t a bandwagon “theme of the day.” The model is: “Seek first the Kingdom of God,” and all this other stuff—whatever it is, whenever it occurs, wherever it is—Jesus’ grace, His love, His forgiveness will be given to you. His mercy, His power, His promise of eternity—all are sealed with His blood. That is constant, eternal, real, and powerful. That is your agenda. That is your church’s agenda. That is God’s agenda.