Strengthening Your Church: If You Could Do Just One Thing? 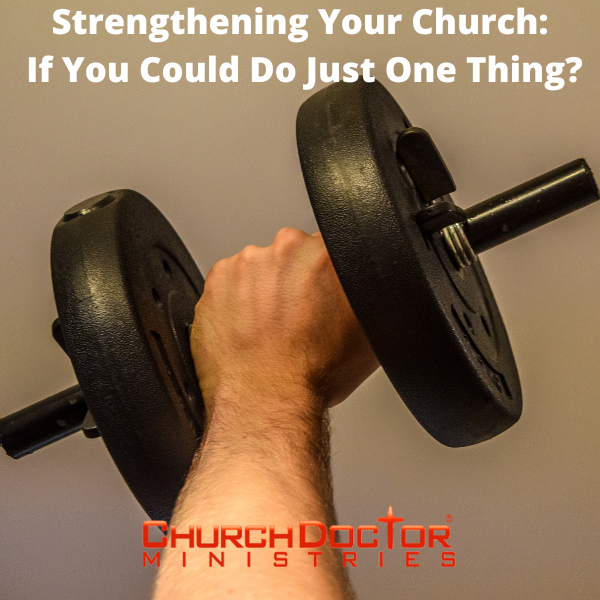 You don’t have to be a church expert to know that, overall, the Christian movement is losing ground in the US. Of course, that is a general statement. There are many churches that are thriving: growing in numbers of people, reaching all ages, providing biblical depth through teaching, equipping constituents to live for Christ in a challenging world, and effectively making disciples among those who were previously unbelievers.

Yet, the majority of churches—of all sizes, different affiliations, and in a variety of locations—are declining in membership and aging. The median age of worshippers increases every year. There are exceptions, where a formerly plateaued or declining church reports attendance and membership growth. However, upon closer scrutiny, many of them are pulling members from other area churches. This is often the result of a uniquely gifted leader and the ability to attract exceptional staff. Yet, what seems like growth for those churches reflects loss of some Christians who left previous congregations.

What Would You Suggest?

Not long ago, I was having a round table discussion with several leaders of churches that were plateaued or in decline. Clearly, they were passionate about helping their churches become more effective in the mission Jesus gave to every congregation: to make disciples of Jesus Christ.

It’s not unusual for pastors and church leaders to search for the “silver bullet”—the one antidote to fix the declining church. Of course, local churches are much more complicated than one simple answer—or, even one complex answer. If the solution was so simple, those church leaders would have turned their churches around already.

Then one pastor pressed further: “OK, I get it. I understand the issue is complex. There is no simple answer. However, can you—would you—be able to share the best place to start? Where should we focus first, if we want our church to be more effective in reaching those who are far from God?”

Been There, Done That

The pastor’s question was not hard to answer, not because I’m so smart, but because I’ve been where that pastor is. God called me to ministry while lying in a hospital, recovering from knee surgery as a result of a football injury. It was my senior year of high school, and my only picture of the future had been to play college football. I lay there with a cast from my hip to my ankle with no future plan for life.

God finally got my attention—a miracle. My parents, grandparents, and my pastor had prayed for me for a long time. They just prayed I would come back to Jesus. They never dreamed I would want to become a pastor. Nor did I, until then.

After high school, I began a journey of preparation that lasted more than a decade: four years of college, three years of seminary, and one year of internship at a church. As my seminary class graduated, I chose to stay at the seminary for three years of graduate school. It wasn’t the PhD degree that lured me. I remained in school because, after all those years, I still hadn’t learned what God infused in my heart: How do I personally and effectively reach lost people? How do I lead a whole church of people to reach those far from Jesus—unbelievers who make up the social networks of those who regularly attend?

After three and a half years of graduate school—and the degree—I had taken about every course the seminary offered. So, there I was: with a B.A., a Master of Divinity, and a PhD in theology—and no clue how to effectively reach those who are far from God. I ran out of educational opportunities—or so I thought.

I was placed in an inner-city church in a changing neighborhood. It was an all-Anglo congregation in a community that was 50% African American. There were about 450 in worship, and I was their only pastor. I preached two worship services every Sunday morning and a different sermon on Wednesday mornings for about 70 retirees. I had almost 50 funerals each year, every year. The church had declined by 67 percent in the previous 10 years.

It was clear: I wasn’t equipped for the challenges this congregation faced. They were great people. I was an underprepared preacher. I tried several “evangelism programs” and stuck with it for two years—with dismal results. I tried to get help from the denomination. The state leaders told me, “We already closed 20 churches in Detroit.” I called the national headquarters. I was told, “Do the best you can for as long as you can. We don’t really know what works in that situation.”

As I struggled, I refused to believe God didn’t care about that community—filled with both black and white people who were far from God. I didn’t know what to do. It was only briefly, but a thought crossed my mind: “Maybe I missed my calling in life.” I was discouraged, frustrated, and even mildly depressed.

Then, one day, I got a card in the mail. It was sent to pastors throughout Michigan. It explained a training program designed specifically for American pastors. The process trained American pastors to be “missionaries” to their own country, in their own location, from their own church. The teachers were all career missionaries who had served in various parts in the world. They all had degrees in “missiology”—the biblical study of missions. The classes were two intensive weeks at a time. Numerous books were assigned for reading in advance, before each two-week session. After each session, at the seminary, I was required to write a paper explaining how I would use what I learned in my church. I got permission from the elders of my church to give it a try. (They were as desperate about the future of the church as I was.) I went to that school three times a year for two and a half years. I learned missiology. I became a missionary. Today, almost 40 years later, that church is a thriving black congregation.

The Missing Ingredient for Your Church

If you are a pastor or leader in your church and have been trained in missiology, you are already a missionary to your community. However, if, like me, you never had that training, you may be frustrated.

After serving a couple of churches, one in Detroit and one in Indiana, God pulled me into a ministry of consulting, writing, and teaching. In the process, I have had the amazing privilege of training thousands of pastors and church leaders on six continents and helping several thousand churches in the US through church consultations. In the process, I have worked on a video curriculum for almost 20 years. It is called the SEND Movement. (The word “send” in Scripture is based on the Greek—and Latin—word for “mission.”)

Recently, our team at Church Doctor Ministries has finished the third revision of the SEND Movement teachings, which are now available online. Basically, the content is “Missionary 101.” It teaches church staff and congregational members how to be missionaries to their own social networks. Mission training is often the missing ingredient for most Christians and many pastors—just like it was, at one time, for me. God used mission training to change that inner-city church in Detroit. It transformed another church I served in rural Indiana. It has helped—through the video teachings—many churches all over the US.

If You Could Do Just One Thing

So, if you could do one thing, it would be to teach the principles of missiology—how to be a missionary to people in your own area. As you might guess, this is not a quick fix. Once you have access to the video teachings, it might be a whole year for a select group to go through them. That first group should include every staff person and most of the members who are leaders in your church, whether they have an official position of influence or not.

This is not a quick fix, nor is it a program. It is neither. It will become part of the lifestyle of the church. Each person who is trained in the SEND Movement should be constantly looking and praying for those in the church they can recruit to use the training videos—to grow, to become missionaries. This multiplication movement should continue until Jesus returns.

One final note: Once a follower of Jesus becomes a missionary to those in their social network, they are never the same again. Once you have the mission DNA, you don’t lose it. You multiply it. It is the one best effort you can use to strengthen the mission of your church. Jesus said it, “As the Father sent me, I send you.” What does that mean to you, and what are you going to do about it?

Sooner or later, Christians must realize: We live on a mission field. Every Christian is a missionary, by God’s design. We all need to be trained in the biblical discipline of missiology. God will do the rest.