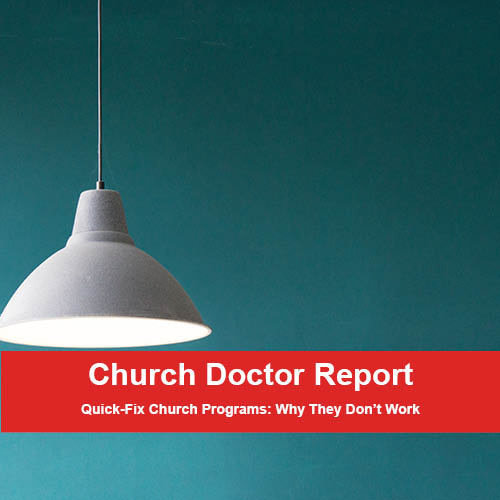 Andy and Ron are pastors of churches in neighboring communities. Let’s drop in on their conversation over lunch. They are sharing congregational frustrations.

“You know, Andy, we bought into that new program that came out a couple of years ago,” Ron shared as he poured ketchup on his french fries.

“You’ve got enough ketchup, Ron?” Andy joked. “Should I ask the waiter for another bottle?”

Ron just smiled. “Yeah, I like a few french fries with my ketchup.” Then he got back on topic, “Yeah, we tried that at our church. At the beginning, there was a lot of fanfare. We showed the video clips in worship to promote it. We put the posters everywhere. I preached — well, I actually modified the sermon message they provided in the program. I practically begged people to get involved.

Andy interrupted: “Would you pass the ketchup? Is there any left?”

“Yeah,” Ron replied, as he passed the ketchup. “We worked hard at it. At the end of the day, those involved were pretty much the same ones who are always involved.”

“What about measurable results? Did it make any real change in your church?” asked Andy.

Ron paused and thought carefully. “You know, I think those involved learned some good stuff, but honestly? I don’t think it changed very much in their lives. I haven’t really seen any change in our church either. Oh, maybe just a little. I don’t know — no, not much.”

Kent R. Hunter goes on to address the following questions/topics in this issue of The Church Doctor Report.