Plagues and Triumph: Pandemics and the Growth of Christianity 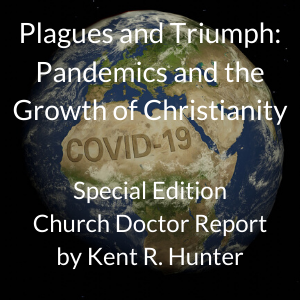 Years ago, I read Rodney Starks’ The Triumph of Christianity. As Christ-followers, we can learn a lot from the two plagues that hit the Roman Empire in the second century AD.

The Romans who were wealthy were experts in social distancing! When the plagues arrived, they fled to the remote countryside. They left the masses of poor people behind to suffer and to die.

The Christians had a different worldview:

This is what believers do. This is who Christians are.

So, as the wealthy fled for the hills, the Roman masses suffered from disease. Christians, with a resurrection mindset and eternal perspective, stayed behind to care for those who were sick.

When the Roman plagues ended, the wealthy people returned to the cities. They were astonished to discover what was undeniable: The Christians had stayed and prayed, cared and comforted, blessed the sick, and buried the dead. Like the popular contemporary song says, “You’re the God who stays…when the whole world walks away” (The God Who Stays by Matthew West).

The result? The wealthy, influential Romans discovered that Christians are heroes. Many discovered the real Hero, the One who beat death once and for all. The Christian Movement was greatly advanced throughout the Roman Empire.

Does it feel like a form of persecution that you cannot physically gather with friends at church for worship? Is that your focus, your worldview? Look, it’s easy for all of us to drift into the “‘poor me’ spiritual consumer mode.” I get that. It’s a real temptation.

Consider this: In Acts 8:1, there is a news report about some bad times for the followers of Jesus. “There was a great persecution of the church in Jerusalem.”

I don’t know about you, but I don’t think persecution is “great” at all! Yeah, I know, “great” means huge, right? Hold on: it was really “great”—awesome—as well.

Read on in Acts 8. What was the result? “The believers were all scattered.” Does that sound like your life, your church, today? What is great about that?

Yet, look at what Scripture adds: “The believers were all scattered, preaching the Word.”

Kent R. Hunter is the founder of Church Doctor Ministries (www.churchdoctor.org) and has spent decades helping Christians and churches get organized to make disciples for Jesus Christ.  He is the author of numerous books including his two most recent books: Restoring Civility: Lessons from the Master and Who Broke My Church? 7 Proven Strategies for Renewal and Revival, both available on on www.amazon.com.