With all this going for us, my dear, dear friends, stand your ground. And don’t hold back. Throw yourselves into the work of the Master, confident that nothing you do for him is a waste of time or effort. I Cor. 15:58 – The Message

Certainly there is broad agreement that Abraham Lincoln was a great President. And many would agree he was, perhaps, the greatest! Most would argue he was a providential leader, appearing during a crucial period of the young republic! Some may even go so far as suggesting he was DIVINELY placed! If in God’s providence the United States of America was to be forcefully used in the global propagation of the Gospel of Jesus Christ, as history now records, then human slavery would, must be, eradicated from shore to shore!

The first of many compromises between the slave-holding south and its northern cousin, which in Article I, Section 2, [3], of the US Constitution stated that each state’s number of representatives to the House would be determined, among other factors, by, “. . . adding to the whole Number of free Persons, including those bound to Service for a Term of Years, and excluding Indians not taxed, three-fifths of all other Persons,” would only delay the ultimate confrontation which would finally and totally end the ungodly practice.

The fact that a country-bumpkin from Illinois, who had served only one term in the US House of Representatives, and had not been formally educated, would ascend to the highest office in the land, is amazingly provoking. Lincoln received one of the weakest popular votes in history, due to the split in the southern Democrats. Had Douglas been elected, he would have died in office. Of course had Douglas been elected no southern state would have seceded and slavery would have been indefinitely retained. Surely a Higher Power was at work with and through the heart of the greatest American born into the 19th century, who would singularly have more to do with the present than even the founders!

In Springfield, Illinois, in 1839, Lincoln attended a revival service at the Methodist Episcopal Church, where Rev. James F. Jacquess was preaching. “Now, I have seen many persons converted; I have seen hundreds brought to Christ, and if ever a person was converted, Abraham Lincoln was converted that night.”

In his own words, Lincoln said, “When I left Springfield, I asked the people to pray for me, I was not a Christian. When I buried by son, the severest trial of my life, I was not a Christian. But when I went to Gettysburg, and saw the graves of thousands of our soldiers, I then and there consecrated myself to Christ.” In the days that followed, Lincoln worshipped regularly at New York Avenue Presbyterian Church, not only on Sunday, but at the Wednesday evening prayer service as well.

The Union’s preservation not only ended human slavery in America, but opened the door for so much good that has come from those terribly bloody years, for which we and the world are the benefactors. One cannot research the writings of Lincoln and not sense his unwavering faith in God. October 24, 1863, he addressed the Baltimore Presbyterian Synod, in Washington.  He told those gathered, “. . . I sincerely wish that I was a more devoted man that I am. Sometimes in my difficulties I have been driven to the last resort to say God is still my only hope. It is still all the world to me.”

In the words of Lincoln given at his final inaugural speech March 4, 1865, let us all, “. . . strive on to finish the work we are in; to bind up the nation’s wounds; to care for him who shall have borne the battle, and for his widow, and his orphan – to do all which may achieve and cherish a just, and lasting peace, among ourselves, and with all nations.” Sounds very much like a Christian mandate, if you ask me.

Oh Lord, my God, I pray though my body is weary and my frame weak, I will not hold back anything from my mission and with your assistance will persevere and accomplish the purpose I have been called to perform. 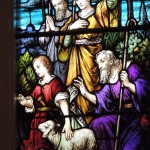 Pioneers understand their mission so well that nothing deters them from their objective and they put everything on the line every day because they are commissioned!