Pioneering Thought: Will We Go Along? 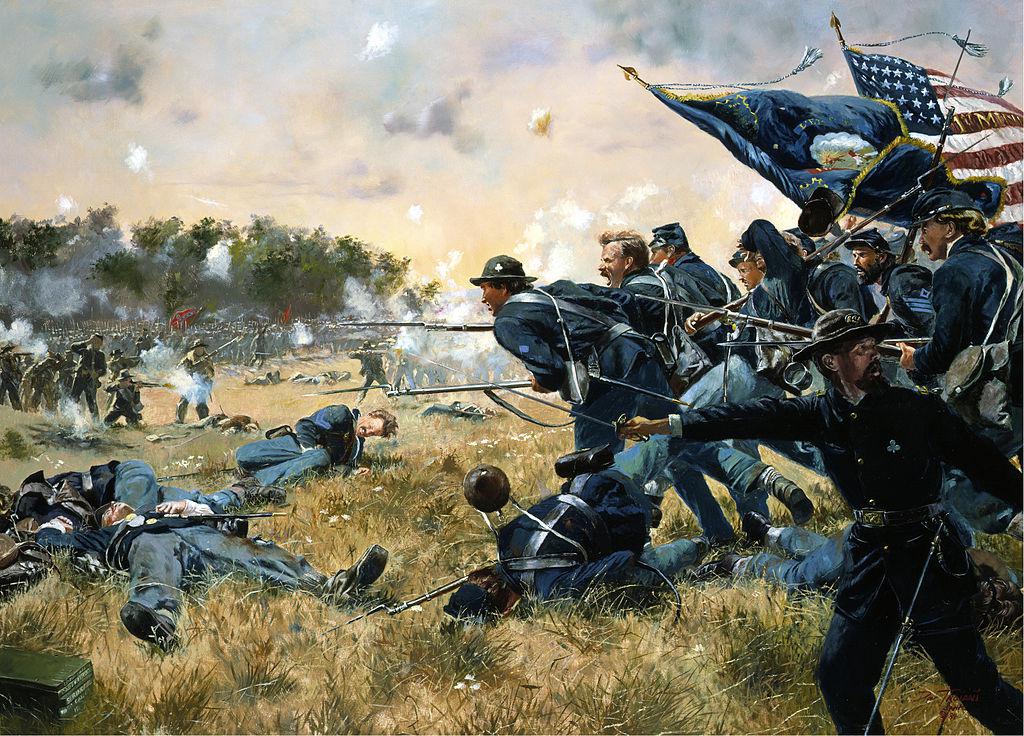 Endure hardship as discipline; God is treating you as sons. For what son is not disciplined by his father? If you are not disciplined (and everyone undergoes discipline), then you are illegitimate children and not true sons. Hebrews 12:7, 8 NIV The First Minnesota was among the first to respond to Lincoln’s call for troops to put down the rebellion of Southern States in 1861. In the battles of First Bull Run and Antietam they sustained some of the highest losses of any regiments engaged. By the time they reached Gettysburg, Pennsylvania, the regiment totaled less than four hundred men. One hundred were disengaged to act as provost guard leaving a mere 262 officers and men in line, July 2, 1863.

The men hailed from St. Paul, Minneapolis, Hastings, Winona, and Red Wing and other small towns. They were farmers, woodsmen, lumberjacks, trappers, and professionals, rugged men who knew how to survive in rough environs.

This day their Colonel was 6′ 5” attorney-at-law William J. Covill, Jr., of Goodhue County, Red Wing, Minnesota, who was born in New York and read law in the office of Millard Fillmore. He’d been elected by the men of Company F to be their Captain in the beginnings of the First Minnesota, but due to the promotion and death of previous Colonels, Covill now led the Minnesotans.

Late afternoon on the second of July Longstreet’s assault was nearing the First Minnesota’s position. Already, soldiers from Sickles’ Third Corps, which had been folded back by Lee’s Old Warhorse, were running by the Minnesota men. Union Second Corps commander, General Winfield Scot Hancock, recognized the danger of a Confederate breakthrough of the center of the Federal line on Cemetery Ridge, and riding up to Covill ordered the regiment to charge against the 1600 Alabamians approaching under Cadmux Wilcox’s command until he could secure troops to reinforce the line. The volunteers of the First knew what this meant. Turning to his men Covill shouted, “Will we go along?” The regiment replied in unison, “We will!”

Fifteen minutes later 215 of the 262 who charged lay dead, dying, or wounded with Covill among the injured, but, the momentum of the First Minnesota had stopped the Alabamians long enough for Hancock to plug the line and prevent a Confederate incursion. Dedicating a memorial to Covill at his grave, July 29, 1928, President Calvin Coolidge said of Colvill and the charging regiment, “Colonel Covill and those eight companies of the First Minnesota are entitled to rank as the saviors of their country.” In the annals of the United States Army no regiment has lost a higher percentage of men engaged in one action than the First Minnesota.

Without the firm resolve and discipline of men who absolutely understood their duty, and what was expected of them, who were able to focus that discipline to produce the momentum necessary in halting the progress of a larger and overwhelming military force, history may have been differently written.

Prayer – Oh God, discipline me, shape me, making me the vessel you intend that will be faithful in all circumstances and situations. May I forge ahead focusing on your will and create momentum that will burn a path for others to follow.

Pioneering Thought – Disciplined pioneers endure all hardships focusing on their duty, pressing forward, creating a momentum that propels them and those who follow.
– Dennis L. Kutzner From the ridge toward the swale
They raced into the fray,
From Minnesota the Regiment hailed
T’was the First that saved the day!

Charged — they did with bayonet,
Little hope they would survive,
But none would soon forget
For the Nation they’d give their lives.

Hancock called the men in place
To save the line that day;
Everyone knowing he would face
Death in an uncertain way.

Rushing to their ultimate test
They gave no heed to resignation,
Only that they’d give their best
To save the fractured Nation.

Covill cried, “Will we go along,”
Theirs, an affirming “yes,”
Charged 260 strong,
The long gray line was pressed.

Down the slopes the Regiment ran
Double-quick their forward pace,
The last full measure of every man
Now heightening the fateful race.

Crashing into Wilcox’s Brigade
Their momentum halted the advance
Long enough the line was saved
Crushing any Confederate chance.

Each man knew the time they gained
Their sacrifice — the cost;
But none gave thought to their fame
That saved a Union loss.

Of all the Charges from the past
And the victories they’ve afforded,
Minnesota’s First will last. . .
As no more gallant deed recorded!