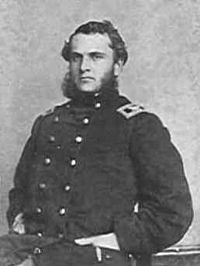 13 But everything exposed by the light becomes visible, 14 for it is light that makes everything visible. This is why it is said: “Wake up, O sleeper, rise from the dead, and Christ will shine on you.” 15 Be very careful, then, how you live–not as unwise but as wise, 16 making the most of every opportunity, because the days are evil. 17 Therefore do not be foolish, but understand what the Lord’s will is. Ephesians 5:13-16 NIV

Leading his Brigade toward the peach orchard twenty-six year old Colonel Strong Vincent seized the reigns of the rider demanding his orders. “I am looking for General Barnes,” replied the orderly. Not yielding Vincent insisted the orderly inform him of his orders. Sticking to his earlier reply he repeated he was looking for General Barnes, then realizing Vincent’s determination, he said, “General Warren requires a Brigade on that hill.” Stopping him mid-sentence, Vincent tersely said, “I will take responsibility for taking my brigade there.”

Colonel Rice was placed in charge of leading the Brigade to Little Round Top, July 2, 1863, while Colonel Vincent and his orderly, Private Norton, road ahead to scout the terrain for the proper placement of the Brigade. Initially placing the 16th Michigan next to the 20th Maine Colonel Rice requested the 44th New York which had always fought next to the 83rd Pennsylvania be given that honor this day to which Vincent agreeing, thus placing his Brigade with the 16th Michigan at the top of the southern spur with the 44th New York, the 83rd Pennsylvania, followed by the 20th Maine completing the line, the 20th Maine being the end of the Union line this day.

Vincent’s brigade successfully held the line that day. Many historians agree had he not taken the responsibility the outcome would have been tragically different for the north.

Graduating from Harvard in 1859 he passed the bar and began working as a partner with William S. Lane in Erie, Pennsylvania, but his legal career was cut short due to the start of the War. Vincent wrote his wife early stating that if he fell in the conflict, “remember that you have given your husband as a sacrifice to the most righteous cause that ever widowed a woman.”

As the brigade passed through Taneytown, Maryland, on its way to Gettysburg, Col. Vincent and his adjunct sat along the road listening to the band and the men marching by as Vincent looked up at the Stars and Stripes and said, “What death more glorious can any man desire, than to die on the soil of old Pennsylvania, fighting for that flag!”

Strong Vincent’s adjunct was with him when he departed this life. In his dying moments he reverted to his youthful Episcopal upbringing and began quoting from memory the Lord’s Prayer, “Our father, which art in heaven, hallowed be thy name.” His battlefield commission making him a Brigadier General was read to him on his deathbed which had been signed by President Lincoln. Vincent’s wife gave birth to a baby girl two months later, who died before reaching the age of one and is buried next to her father in the Erie Cemetery.

Prayer – Lord, help me to live wisely and take advantage of every occasion to live my life an example of your great love for humanity. When necessary assist me in taking the lead and be a wholly responsible leader.

Pioneering Thought – Because pioneers are responsible people they take the initiative and in so doing set the pace for others to follow.