As for me, my life has already been poured out as an offering to God. The time of my death is near. I have fought a good fight, I have finished the race, and I have remained faithful. And now the prize awaits me — the crown of righteousness that the Lord, the righteous Judge, will give me on that great day of his return. And the prize is not just for me but for all who eagerly look forward to his glorious return.
2 Timothy 4:6-8 New Living Translation 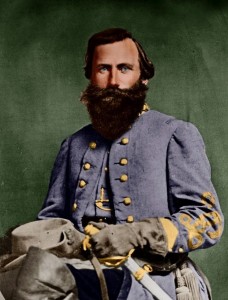 James Ewell Brown (Jeb) Stuart was 31 when he died, May 12, 1864, succumbing to a mortal stomach wound after the Civil War battle of Yellow Tavern. Known for his mastery of reconnaissance and the use of cavalry in support of offensive operations, he cultivated a cavalier image (red-lined gray cape, yellow sash, hat cocked to the side with an ostrich plume, red flower in his lapel, often sporting cologne), but, his serious work made him the trusted eyes and ears of Lee’s Army and inspired Southern morale.

Attending West Point from 1850-54 he was under Robert E. Lee’s tutelage when Lee took over as superintendent of the Point in 1852. The faithful Christian devotion of his mother was embedded in Stuart’s character causing his cadet classmates to dub him Bible Class Man. He carried orders for Robert E. Lee to proceed to Harpers Ferry to crush John Brown’s raid. Stuart, volunteering as aide-de-camp, went along and read the ultimatum to Brown before the assault in which he distinguished himself.

Twice during his Confederate carrier (during the Peninsula and Maryland Campaigns) he circumnavigated the Union Army of the Potomac, bringing fame to himself and embarrassment to the North. At the Battle of Chancellorsville, he distinguished himself as a temporary commander of the wounded Stonewall Jackson’s infantry corps.

Controversy surrounded the third ride around the Union Army which caused his late arrival at Gettysburg and added to the many “what ifs” of that battle. Lee’s scolding of Stuart was one of the few times his anger was displayed. On the third day at Gettysburg Stuart failed to penetrate the Union line from the rear being stopped by Custer’s 7th Michigan.

Jeb Stuart did not drink or use tobacco, devoted to a promise he’d made his mother to never give in to the habit. He was loved by his men on account of his fairness and extreme desire to take care of his subordinates. He was friendly and approachable.

Nearly one year to the day of the death of Stonewall Jackson, Stuart would be mortally wounded during the Overland Campaign. Union cavalry General Philip Sheridan, leading a much matured cavalry, pressed Stuart and his troopers. Jeb Stuart nearly overcome by rushing horseman turned to empty his revolver, but a volley from the attackers took him down.

To the Doctor, who sat holding his wrist and counting the fleeting, weakening pulse, he remarked, “Doctor, I suppose I am going fast now. It will soon be over. But God’s will be done. I hope I have fulfilled my destiny to my country and my duty to God.” His worldly matters closed, his eternal soul engaged his mind. Turning to the Rev. Peterkin, of the Episcopal Church, and of which he was an exemplary member, he asked him to sing the hymn, “Rock of ages cleft for me, Let me hide myself in thee,” he joining in with all the voice his strength would permit. He then joined in prayer with the ministers. To the Doctor he again said, “I am going fast now; I am resigned; God’s will be done,” passing briefly thereafter. His wife reached the house of death and mourning about ten o’clock on Thursday night, one hour and a half after his death. She wore black the remainder of her life.

Prayer: Lord, help me to be faithful to the call to preach and pave a way for others to follow and to keep on keeping on until you call me to my eternal rest.