Pioneering Thought: A Christian Tract and the Fighting Bishop 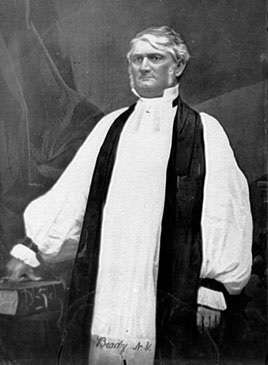 Then they cried out with a loud voice, stopped their ears, and ran at him with one accord; and they cast him out of the city and stoned him. And the witnesses laid down their clothes at the feet of a young man named Saul. Acts 7:58-59 NKJV 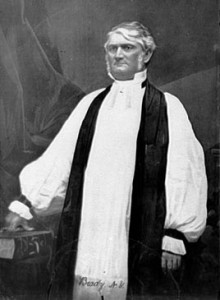 Leonidas Polk was born, 1806, in Raleigh, North Carolina, to a soldierly family dating back to before the Revolutionary War. His father, William, served in the Revolution with the rank of Colonel and acquired substantial land holdings from his service. In 1823 Leonidas was given an appointment to West Point.

During his time at the Point he developed an interest in Christianity and began pursuing informative materials after reading a Christian tract left in the barracks by a young man who had sought counsel from Chaplain, Charles P. McIlvaine, for the loss of his father. Chaplain McIlvaine had instructed the grieving cadet to leave the tract in a conspicuous place.

Cadet Polk sought out the Chaplain confessing that in his reading there had never been a professor or cadet ever professing religion at West Point, but he was a changed man and wished to do right. The Episcopal Chaplain encouraged Cadet Polk to take a stand in Chapel. The next day, Sunday, Cadet Polk knelt at the altar to symbolically demonstrate his Christian commitment. Present that memorable day, were cadets Robert E. Lee, Albert Sidney Johnston, Joseph E. Johnson, Jefferson Davis, and Robert Anderson. Each would serve with the Armies pitted against one another 36 years later. Polk, who was commissioned a Bishop with the Episcopalian denomination, would become a General with the Confederacy.

In 1825-26, the United States Army Chaplaincy, 1791-1865, Volume II, records a massive religious revival at West Point under the Chaplaincy of Charles McIlvaine, who had been appointed to the academy, January 1, 1825, by the Secretary of War, John C. Calhoun. Cadet Polk’s public witness was a catalyst for that revival.

After graduating in 1827 he resigned his commission to become a priest in the Episcopal Church and would become a Bishop in 1840. Bishop Polk was the leading founder of the University of the South in Sewanee, Tennessee.

May 18, 1864 the same Albert Sidney Johnston, who witnessed Polk’s conversion at West Point, asked the Bishop to baptize him while Johnston lead the Confederate forces toward Atlanta, and in the midst of warfare Bishop General Polk willing obliged his classmate who he now served under. Generals William Hardee and John Bell Hood were witnesses.

One month later, June 14, Polk joined Johnston and Hardee, at Johnston’s invitation, on Pine Mountain near Marietta to view the valley. Near the crest a federal cannon ball crashed through the Fighting Bishop’s chest opening a wide window that freed his indomitable spirit. In his pocket, now blood-stained, were two Christian tracts he had prepared for the two Generals.

PRAYER: Oh Lord, you, who have wonderfully intervened in my life and chosen me to perpetually carry your message of unconditional love and willingly share it with humanity, grant that I will be faithful. Open doors to impact men in low and high places and cause that influence to change their history.

PIONEERING THOUGHT: Pioneers recognize the superseding hand of God in their lives, and live accordingly, seeking occasions to impress the love and acceptance of God on those within their sphere of influence.