Pioneering Thought…Leaders Press On, Against All Odds

Not that I have already attained, or am already perfected; but I press on, that I may lay hold of that for which Christ Jesus has also laid hold of me. Brethren, I do not count myself to have apprehended; but one thing I do, forgetting those things which are behind and reaching forward to those things which are ahead, I press toward the goal for the prize of the upward call of God in Christ Jesus.

Joshua Lawrence Chamberlain, a graduate of Maine’s Bowdoin College, found himself leading 386 men in one of the toughest engagements of the Civil War. Chamberlain became Colonel of the 20th Maine Regiment in May, 1863, six weeks before the famous Gettysburg battle. He was also a graduate of Bangor Theological Seminary and a licensed Congregational minister. He had taught Religion and Rhetoric at Bowdoin prior to entering the service. He was a proficient learner teaching himself nine languages. While a student at Bowdoin he heard Harriet Beecher Stowe read her book, Uncle Tom’s Cabin, in her home prior to the book being published,  the very house that had been the home of Henry Wadsworth Longfellow.

One week before the battle the 102nd Maine Regiment was placed under his guard since the men were rebelling due to their belief they had signed two year papers though the government insisted they had signed three year papers. To Chamberlain’s credit as a great leader all but three of  the 2nd Maine men fought with the 20th Maine at Gettysburg, several losing their lives. The outcome of the engagement would have been much different without the additional troops!

Strong Vincent, Brigadier of the four regiments positioned on Little Round Top Thursday afternoon, July 2, 1863, ordered Chamberlain to hold the extreme left end of the Union line to the last. Chamberlain knew exactly what the order meant and the consequences if the line was not held.

Quickly recognizing the oncoming Alabamians would attempt to outflank the 20th he refused his line to the left and received the continued flanking moves by the rebels. The 15th Alabama repeatedly attempted to overcome the Northeasters until both sides were nearly exhausted. The Alabama troops had marched twenty miles that day and entered the fray without water in their canteens. Years later William C. Oates, Colonel of the 15th, asked, “What if we would have had water that day?”

As the Confederate men started up the slope one more time, Chamberlain realized his men were out of ammunition. Ordering the bayonet, Chamberlain recognized spontaneously down the line the cognition of fixing bayonet had taken hold of the men. Then ordering the refused line to swing like a gate down the hill until it was aligned with the rest of the regiment, the screaming Yankees overwhelmed the weary southern men capturing a number of prisoners and saving the Union line.

That he would not accept credit for ordering the charge, when the norms of that time allowed commanders this privilege, largely reflects on Chamberlain’s character. Few, if any, would have objected to this, especially since he did conceive of the charge and was in the process of informing his men. That he continually denied himself the honor of having ordered the charge and instead tried to pass it on to his men, sets him apart from countless other commanders who gave themselves far more credit than they ever earned.

Thirty years after the battle Chamberlain received the Medal of Honor for the action that July. He would serve four terms as Maine’s Governor, president of Bowdoin College from 1871-1883, was the only officer made a General on the field by U. S. Grant, and received the surrender of Lee’s Army at Appomattox. He was the last Civil war soldier to die of his war wounds February 24, 1914, at the age of 85.

Grant, O God, in my leading of others I will not give up in spite of any lack and will confidently press on fulfilling the heavenly orders given to my charge. 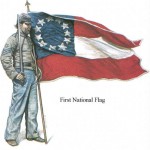 Pioneers, despite overwhelming odds, always find a way to press beyond their limits to accomplish their worthy goals!