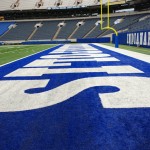 Yeah – I’m an Indianapolis Colts’ fan, or recovering fan after losing Peyton Manning to the Denver Broncos.  Every summer, I spend a couple of days at Colts’ camp and size up their prospects for another exciting season.

This year, with all the changes (Manning gone, along with several household names, and different coaches) I almost didn’t come to camp.  But wait!  Ten minutes into practice I could tell something was very different.  Chatter on the field – enthusiasm.  Intensity.  Everyone engaged.  A hard-hitting practice I haven’t seen in the last 10 years.  The scrimmage was serious – including a short scuffle and a momentary brawl between “opposing” sides – in camp!  These guys are upbeat, on fire, working with focus.  These people are on a mission!

In a short conversation with head coach Chuck Pagano, I said, “You have developed a new culture.  Thank you!”  Coach Pagano looked right into my eyes and paused – like he hadn’t heard that before.  He responded, “Thank you.  We’re trying.”

Culture changes everything – for football teams and churches.  And it shows in action.  In this case, a focus on a mission to put a team together that wins games.  In the church, it’s all about putting a team together to win the world – for Jesus Christ.

Culture, in my perception, is the instilling of right values, beliefs, priorities, attitudes, and worldviews.  The Colts’ culture in pre-season camp has changed:  from a laisser-faire walkthrough to a hard-hitting, get-it-done, make-an-impact environment.

Will the Colts, with first-round, draft-pick, Stanford quarterback Andrew Luck, go to the Super Bowl?  Anything is possible, but probably not.  And this is a lesson for your church:  culture is a long-term process.

It takes time to build a culture of winning – even for Chuck Pagano, who has the leverage of cutting a player from the roster, and paying a lot of money to those who make it.

In the church, a faith environment with volunteers, it takes longer.  I don’t believe it’s biblical to intentionally cut anyone who doesn’t get it yet.  Mission is a culture, and you can’t top-down force it like Coach Pagano can.  (The apostles dealt with this in the historical decision in Acts 15.)  The way of Jesus is gentle.  The Kingdom grows like yeast in bread.  But, make no mistake:  it is all about a culture of mission.

Is your church’s culture focused on mission or just going through the motions?