Do the Math: How Your Church Can Reach Thousands 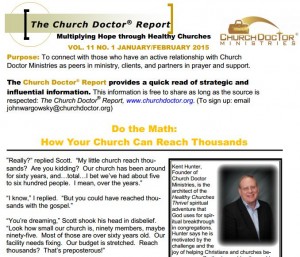 “Really?” replied Scott. “My little church reach thousands? Are you kidding? Our church has been around for sixty years, and…total…I bet we’ve had about five to six hundred people. I mean, over the years.”

“I know,” I replied. “But you could have reached thousands with the gospel.”

“You’re dreaming,” Scott shook his head in disbelief. “Look how small our church is, ninety members, maybe ninety-five. Most of those are over sixty years old. Our facility needs fixing. Our budget is stretched. Reach thousands? That’s preposterous!”

The Parable of the Corn Cob 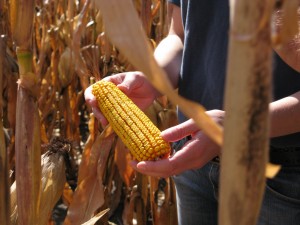 I reached into my briefcase and what I pulled out got Scott’s attention. It was a cob of corn. “Scott, this is a cob of corn. It’s a symbol of the way God operates on every level, every time. You plant one kernel of corn. And it grows into a stalk. On that stalk there is at least one ear of corn, often two. Sometimes there are three. I know, because I planted this kernel of corn.”

Scott looked at me and contemplated a joke about being “corny” but passed, thinking it was so stupid.

“Guess how many kernels of corn are on this one cob of corn?” I asked.

“You mean you counted them?” Scott asked.

“Actually, I did. Well, I counted the number of kernels in a row and multiplied the rows. The answer? From one kernel of corn, not counting the other ears on the same stalk, this cob of corn has six hundred and twelve kernels.”

Scott was amazed, and I had his attention. I hope I have yours, too.

Neil Cole once shared this with me over lunch: “God is all about multiplication. The church, is occasionally good at addition. We are very good, however, at subtraction. Sometimes, we’re excellent at division!”

Multiplication is God’s plan for the church. However, most churches, if they grow at all, grow by addition. And we celebrate that, even though it is far below God’s best plan. If we don’t get this right, we don’t get God’s plan for our churches. To be specific: the devil’s strategy is to divide and conquer. The Lord’s strategy is to divide and multiply.

When I ask church leaders about how their church is making disciples, they talk about preaching, teaching Bible classes, and Sunday school. However, these are not ministries that make disciples. They are very important ministries that provide part of the process of growing Christians.

Not to be mean, but to make a point, let me ask you, “Who are you discipling right now?” Who are you pouring your life into, as a mature Christian, raising up a child of God? Who are you focusing your time on? If you can’t name anyone, then you may be doing a great job at sharing the faith, teaching others about the Bible, but you may not be multiplying. Why is that so important?

In Matthew 25:14-30, Jesus tells a story about some servants who were given a piece of the king’s property to manage. This story, in older translations of the Bible, speaks about a man who was given five “talents,” another given two “talents,” and another man given one “talent.” You can think of this as different amounts of money or responsibility. You can also think of this and consider it to be your church, your life, your time, the use of your gifts, your energy. All of it belongs to God, and each is a piece of His Kingdom.

Each of the servants was to manage a piece of the property for the King until He returns. You are likely familiar with the story. The person who had five talents multiplied what he had. The one who had less responsibility, two talents, multiplied also. However, the person who had even less responsibility, one talent, dug a hole and hid the Master’s money.

When the King—in this story, the Master, Jesus—returned, he told the multipliers, “Well done good and faithful servant…enter into the joy of your Master.”

The Master then learned about the one who had hid the money, who did not multiply. He had some harsh words: He called him “wicked and lazy…a worthless servant.”

Someday, you will leave this earth and be with Jesus. You will be with Jesus because you believed in Him as your Savior. This is the sure promise of eternal life. But when you get there, would you like to hear Him say, “Well done, good and faithful servant”?

Jesus has given you one mission: to make disciples. Discipleship is the multiplication of ourselves. As a Christian, how many times have you multiplied yourself, spiritually? Who is your disciple right now?

You can’t disciple twenty-five people at once. Jesus, the Son of God, limited His primary group to twelve, and that was His full-time work. Even then, one of them didn’t make it. So who is your “spiritual project” right now?

There are two types of discipling in the New Testament. One is the discipleship process of reaching a non-Christian who becomes a baby Christian, and, through nurturing, matures into a spiritual young adult. This is the commission given in Matthew 18:19-20, multiplying to make disciples.

The second approach to making disciples is equipping a Christian for the work of ministry. This is done in a one-on-one relationship by modeling, mentoring, apprenticing, and growing that person into Christian ministry. This is reflected in Ephesians 4:11-16, which is all about building the body of Christ, the church.

Discipling is a personal, one-on-one, long-term relationship. It includes baptizing and teaching. But it is a relational, personal process. This is the way Scripture describes it. It is the way Jesus modeled it. It is what the early church demonstrated.

When it happens, churches grow and Christianity explodes exponentially. The Christian movement is designed to be caught, relationally, one person to another.

Why Every Church Leader Should Study Epidemiology

Movements reach critical mass, and at that tipping point, they explode. This is called geometric progression. It is just like an epidemic.

Before you say, “That could never happen in my church, in our city, in this country,” remember that this is exactly what happened in the early church. The Mediterranean world was turned upside down. It also has happened in many places around the world. It is occurring today in Ethiopia, parts of Nigeria, a portion of South Africa, Argentina, and Communist China, just to mention a few places. It is also happening in some churches in the U.S. and Europe, today. The word that missiologists use for this multiplication is a revival.

Christians have been lulled into the concept that a revival is an extraordinary act of God that is, in the words of some, “almost beyond belief.” In truth, according to the Scripture, this is normal. Exponential, explosive growth of the Kingdom of God is the way it’s supposed to occur. Revival is not the exception. Churches plodding along at addition are the exception.

The DNA of God is designed for multiplication. In Genesis 1:22, God said people are supposed to fill the earth. His mathematical approach you know: “Be fruitful and multiply….” If you know anything about demographics and history, this is exactly what has happened. God’s math works. That’s God’s plan for filling the planet with people.

God’s plan to fill heaven is absolutely and entirely the same approach. Jesus could have said “be fruitful and multiply the faith.” His words were, “Go, make disciples,” Matthew 28:19-20. Just so that we would get it, Jesus modeled this, and His ministry went from one to twelve, in the leadership group, and many more that were in the next circle of followers. This Jesus epidemic continued in the power of Pentecost, and the church grew from twelve to 120 then to 3,000 and then to 5,000 in a relatively short period of time. Before long the New Testament talks about “multitudes,” even before you get very deep into the book of Acts. You may recognize that the word “multitude” is related to the word “multiplication.” Soon after that, the church exploded even further as Christian communities, called congregations or churches, were multiplied across the Mediterranean world.

Where We Get This Wrong

This week, millions of Christians will have a conversation with someone in their social network. This will be someone with whom they have a relationship. It might be a neighbor. It could be someone where they work or go to school. It could be a relative. It could be a conversation with a waiter, a clerk at the grocery store, the woman at the checkout in the pharmacy. And, instead of pursuing a discipling opportunity, they will discuss sports, weather, the latest bad news on television, and thousands of other topics without ever recognizing that they are called as a disciple to begin, very delicately, the process of introducing another person to Christ.

If they are what many church leaders consider to be “an extraordinary Christian” with a “mission heart” they will try to invite them to church. They think, “If I just get them into the building, then the pastor will preach and teach them and they will participate in programs and the institution will disciple them.” Addition, not multiplication!

What about ministry multiplication? Today, hundreds of thousands of pastors will visit someone in the hospital, and take no one with them who they are discipling, multiplying, for hospital ministry. They have forgotten the simple invitation, “Come follow me,” which Jesus demonstrated.

The Movement Begins With You

The exponential expansion of Christianity is an inside job with every Christian. If it’s going to happen, it absolutely must be modeled by every church leader. If leaders don’t multiply, don’t expect anyone else in the church to get it. This multiplication is a DNA issue. It is caught not taught. It begins with you, personally.

It is likely at the end of your time on this earth – when you go into the presence of Jesus – you would really like to hear the words, “Well done good and faithful servant.” It is also likely that you would like to see those in your social network, who don’t yet follow Jesus, come to saving faith. It is also likely that you would love to see your church bursting at the seams, no room for all the people. It is quite possible that you would like to see the challenges for your church move from tight budgets and arguments about the color of the new carpet to real challenges – like where do we put all the people?

Kent Hunter, Founder of Church Doctor Ministries, is the architect of the Healthy Churches Thrive! spiritual adventure that God uses for spiritual breakthrough in congregations. Hunter says he is motivated by the challenge and the joy of helping Christians and churches become more effective in reaching the world for Jesus Christ. “Discipling, like raising kids, is the toughest work—and most rewarding. Working for, and with, the King of the universe is energizing.”