Can Your Spiritual Maturity Handle Technology? 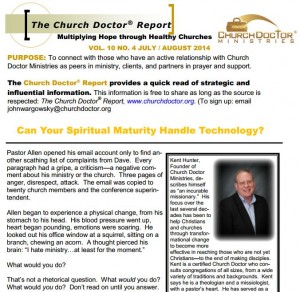 Pastor Allen opened his email account only to find another scathing list of complaints from Dave. Every paragraph had a gripe, a criticism—a negative comment about his ministry or the church. Three pages of anger, disrespect, attack. The email was copied to twenty church members and the conference superintendent.

Allen began to experience a physical change, from his stomach to his head. His blood pressure went up, heart began pounding, emotions were soaring. He looked out his office window at a squirrel, sitting on a branch, chewing an acorn. A thought pierced his brain: “I hate ministry…at least for the moment.”

What would you do?

This is not an intellectual exercise. Feel Allen’s emotions, sense the instant sweat, the churning of his stomach, the pounding in his head. See the squirrel and contemplate: fight or flight?

I suspect this has happened to you before, whether you’re a pastor or not. Electronic conflict impacts everyone sooner or later. What would you do?

Across the landscape of Christianity, particularly the U.S., Canada and Europe, we, may not be healthy enough, spiritually, to handle technology. For every ounce of energy exerted to win lost neighbors to Jesus, there is a ton of resistance birthed through electronic media…from Christians! The internet is poisoned with bad Christian behavior: by notable and visible Christian leaders, denominational executives, everyday Christians from all walks of life, believers from all brands of Christianity.

Spiritual abuse of media is not an electronic discipline, communication art, exercise in conflict management, defense of Holy Truth, or an accurate biblical representation of Christian behavior, biblical theology, or spiritual practice. And it is killing our Christian witness. Are you, consciously or unconsciously killing Christianity?

“Hi Mike, how are ya?” I said, as I walked by my neighbor’s house. Mike is a 28-year-old nonpracticing, lapsed Christian who drifted from the faith during law school. He and his wife Cindy have not always done well as a young couple. She was pregnant when they married, and that greatly upset her parents, who live across town. Mike works hard—a real achiever—and has a meth habit. “But I can handle it,” he says.

Mike’s law practice has taken off, and he’s doing well, but not well enough for their lifestyle. They overbought their house, daycare is expensive, Cindy is a teacher, but expecting their second child. Mike has educational debt. The financial pressures are mounting.

I’ve tried to share my faith with Mike. I learned early on that this is not a “would you like to come with us to church” approach. So, I’ve shared a few of my struggles—real stories about how, I believe, God has helped me and my wife get through hard times. Our talks go better over coffee at Starbucks.

“I’ll have a tall vanilla cappuccino,” I told the barista. “How about you Mike? My treat,” I said.

I finally got around to square up with Mike:

“Hey, you know, we’ve talked about spiritual stuff before, Mike. Have you ever thought Christianity might be helpful to you and Cindy?” I wasn’t ready for Mike’s response.

“No offense,” he said. “I know you mean well, but why the hell would anyone want to be a Christian?”

I wanted to think he was searching for a theological answer, but I knew by his tone, that wasn’t going to happen.

“Well, yeah, I’m online all the time,” I responded.

I about choked on my cappuccino.

The Bible says to multiply, but critics prefer to divide. Don’t allow yourself to be a public critic. Jesus warns, “Don’t judge, or you will be judged” (Matthew 7:1). When you throw dirt at others, you will always make a mountain out of a mole hill. Through the grace of Jesus, no mud can soil you except for the mud that you throw at others. The mud thrower never has clean hands.
Source: John Mason, Conquering an Enemy Called Average

What would you do? Dave sends him a scathing email, and copies a bunch of people in the church. What did Allen do? Sadly, he did what many pastors do. Without thinking or applying his Christian sensibility to the internet, he got caught in the electronic trap: “I got it by email, I’ll respond by email. And, I’ll have to copy these people, because they’re all in on it,” Allen thought.

Dave was dead wrong in his spiritual behavior. He should have never sent the email to the pastor. Jesus taught this in Matthew 18:15-17, “If someone offends you, (if you’re upset with someone), go to that person, privately.” Without question, that means face to face—not an email, not even a phone call. Why? When you are face to face, you can see body language, hear tone of voice. You can have a conversation. An email of three pages with a response of three pages is not a conversation. It is a one-sided dump followed by another one-sided dump. This produces heat, not light.

“What about Skype?” you ask. At the risk of sounding out of touch with the 21st Century, the answer is “no!” Why? Because you can’t shake hands, hug, or put a warm hand on an arm or shoulder. You just can’t.

And what about copying all your friends? Are you kidding? Dave totally missed the Eighth Commandment! Does anybody know what the Bible says about gossip? Slander? Consider this: if no one would listen to gossip, no one could gossip. And what about blogs that attack other Christians in front of the whole world? Really? Really?

All these issues predate Silicon Valley. Paul says to young Timothy, “Avoid godless chatter because those who indulge in it will become more and more ungodly. Their talk will spread like gangrene.” 2 Timothy 16-17a (NIV).

You can’t beat God’s plan, on any subject.

The Pharisees ended up talking to themselves and judging the world. As Christians, we are supposed to judge ourselves, and talk to the world.
Source: Walt Kallestad.

What is the profile of a follower of Jesus Christ? How do others distinguish a disciple of Jesus—in contrast to a disciple of someone/something else?

It’s not by your website, email address, Twitter account, or Facebook page, per se. It’s not about how you use your tools of communication, including your tongue. Jesus got this right, like everything else. He told the disciples how people would recognize His followers. What did He say?

It’s not complicated, it’s not spiritual rocket science: “This is how everyone will recognize that you are my disciples—when they see the love you have for one another.” (John 13:34-35, The Message).

The Apostle Paul got this. As a mark of spiritual maturity, he said, “…speak the truth in love.” (Ephesians 4:15, RSV). Christians love one another by holding each other accountable. But we do it in a loving way, directly, face to face, one on one.

Please, on behalf of all of us imperfect but “willing to bust our butts” to reach people for Jesus: if you aren’t spiritually mature enough to stop beating up other Christians on social media, then for the sake of the Great Commission, at least stop killing the Christian movement: UN-PLUG.

Would you electronically behave, for God’s sake?

By the way, this one you can copy to all your friends!

Ten Ways to Clean up Communication 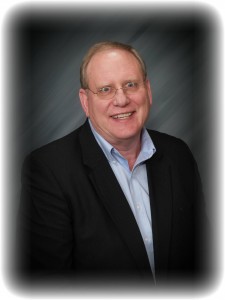 Kent Hunter, Founder of Church Doctor Ministries, describes himself as “an incurable missionary.” His focus over the last several decades has been to help Christians and churches through transformational change to become more effective in reaching those who are not yet Christians—to the end of making disciples. Kent is a certified Church Doctor who consults congregations of all sizes, from a wide variety of traditions and backgrounds. Kent says he is a theologian and a missiologist, with a pastor’s heart. He has served as a pastor in several congregations and trained Christian leaders on six continents. His latest projects have been the eighteen DVD teaching series, The Damascus Road: When Christians Become Missionaries and the twenty-four DVD series, Healthy Leaders Thrive! Connect with Kent via email, Twitter, Facebook.

The Church Doctor® Report is provided at no cost. Share it with those in your network of influence and add value to their lives! Share it with staff and leaders in your church, denomination, network, or fellowship.