Can Anything Good Come From Nazareth? 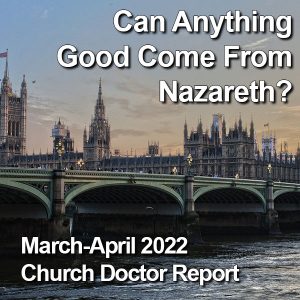 Sometimes, you just have to “come and see.”

To some believers, Christianity is primarily academic. They say, “Accept what the Bible says, read it, study it, and memorize it.” The idea is that if you just know the right stuff, you catch fire for the mission of the Church.

While anything is possible for God to accomplish, most of us grow spiritually through a combination of knowledge and experience. To reach this world, God shows up personally: to Adam and Eve, to Moses, and, ultimately, in Jesus. Perhaps you could say, “The Savior doesn’t just want to fill your head; He wants to touch your heart.” Philip didn’t download a report to Nathanael. He went a big step forward: “You’ve got to come and see.”

Peter was a little skeptical when the disciples thought they saw a ghost walking on the water in the middle of a storm at sea. Then Jesus spoke: “Take heart, it is I; have no fear.” That wasn’t good enough for Peter. He wanted the experience. He said, “Lord, if it is you, bid me come to you on the water.” Jesus replied, “Come!” However, Peter’s faith wasn’t up to it. He started to sink. Jesus made it an experience: He reached out His hand and caught him. Then He said, “Oh man of little faith, why did you doubt?” It’s hard to believe Peter would ever forget that experience! The whole boatload got it, saying, “Truly you are the Son of God!”

The disciple Thomas is a great study in the value of experiential support for mission. In John 11:16, the disciples reflected “theoretical bravery.” He sounds “sold out on Jesus.” He says to the disciples, “Let us all go along with the Teacher, so that we may die with him!” Great theory! But when push comes to shove, Thomas needs an experience with Jesus.

In John, chapter 20, the post-resurrection Lord appears to the disciples who were gathered behind locked doors. However, Thomas wasn’t with them at the time. Later the disciples told Thomas the resurrection good news. His response? “Unless I see the scars of the nails in his hands and put my finger on those scars and my hand in his side, I will not believe” (John 20:24-25).

A week later, Jesus appeared again to the disciples, and Thomas was there. Jesus invited Thomas to act on his words and have that gruesome experience, saying: “Put your finger here, and look at my hands; then reach out your hand and put it in my side.” He added: “Stop your doubting, and believe.” Thomas responded, “My Lord and my God!” (John 20:24-28).

A few decades ago, I was invited to England to teach some workshops for pastors and consult some of the leaders at the international headquarters of the Salvation Army. While I was there, I visited several churches. The experience was dismal: declining congregations with a few elderly members. I met with some of the leaders of the British Church Growth Movement. The experience reflected a call for mission in an environment of church decline. And, I wondered, even then, if this was a foreshadowing of what was to come in North America. Why? The US and Canada tend to follow religious trends in the UK and Europe.

Fast-forward about 10 to 15 years. Church Doctor Ministries was now working with hundreds of churches in the US, and the Church Growth Movement was catching the attention of leaders from several denominations, as well as those in independent and nondenominational churches.

For several years, I worked with the megachurch pastor—and amazing visionary—Walt Kallestad at Community Church of Joy in Phoenix, Arizona. Walt hosted an annual leadership conference that drew hundreds of pastors and leaders from a wide spectrum of denominational and nondenominational backgrounds. I was a frequent speaker for those gatherings and came to appreciate and respect Walt as an amazing leader and good friend.

On one of my many visits, Walt and I were meeting privately when he said, “Kent, for what you do, you need to go to England to see what God is doing. I was just there, and it’s amazing!”

I responded with a common pastoral avoidance tactic: “Yeah, OK, Walt. I’ll pray about it.” I had a vision of Philip’s Nazareth syndrome: “What good can come out of England?” I also thought, “Walt has 10 new ideas every week. By the time I see him again—in six months—he will have forgotten about his ‘fantastic experience’ in England and moved on to something else.”

However, the next time I saw Walt, he asked, “Have you been to England?” This time I replied, “I’ll [really] pray about it.” Walt got my attention! After some honest prayer, I reluctantly sent an email to the British contact Walt provided. There was a part of me that thought, “Maybe that leader won’t respond.”

However, he did respond and graciously invited me to come and spend a week at his church. On the “slight possibility” that it might be worth the trip, I invited a few key pastors/leaders from the US to go with me.

From the academic position, it’s hard to overcome the “Nazareth syndrome”: “What good can come out of Nazareth?” Yet, when you experience it, you see God working at a whole new level. The impact never leaves you the same person you were previously.

As I share this story, the unrest in Ukraine and Russia is very much on the hearts and minds—and in the prayers—of much of the world. Permit me to share a “Nazareth” experience that changed my worldview about Russia a couple of decades ago.

When I was in high school, the Cold War mentality was on the minds of many—including my parents. During one summer, my dad had our front porch cement removed and paid me to dig out the nine feet of dirt. His plan? Put a door out from our basement into that area, replace the concrete porch on top, and provide a bomb shelter to protect our family from the Russians.

Thirty years later, I had become somewhat of an “expert”—in the eyes of some—in the area of church growth, which was another way of describing effective mission and discipleship for the local church. At that time, I was pastoring a small, growing church part time and travelling, teaching, consulting, and writing books about the basics of missiology—to help Christians reach people far from God (my calling, still today).

My Own Russian Nazareth Issue

During this time, I had been invited to teach internationally: in Japan, Cambodia, Belize, Brazil, India, Nigeria, Kenya, and South Africa. One day I was contacted by a leader who wanted us to teach a large training conference in Moscow, Russia. The leader explained that the persecution against Christians had diminished in the Soviet Union. Many excited young adults who had been imprisoned for their Christian activities were being released. They were starting churches in theaters, but had little training. He asked if I would bring a team of leaders to teach hundreds of those eager young Christians.

My reaction? All I knew was the Cold War and a summer of digging a bomb shelter we never used. I had a bad case of the Nazareth syndrome. I’m ashamed to admit it, but thankful to God that I eventually agreed. Yet, as the plane touched down in Moscow, I had a severe case of doubting Thomas as well. The Nazareth syndrome continued to grip me.

Very soon, I sensed what it must have felt like examining the hands and side of the resurrected Jesus. I came to love the Russian people—and realized: God works in the lives of people, in spite of political leaders. In fact, in the midst of tyranny, many people came to faith in Jesus from Nazareth. Experience fires faith and an evangelistic passion. I ended up going back to Russia several times and once to Kazakhstan. And, yes, once to Odessa and Kyiv in Ukraine.

My first reluctant trip to England was everything and more of what Walt Kallestad predicted. Most of the churches were in severe decline, and the well-known cathedrals were primarily tourist attractions, with a few elderly faithful worshipping in mostly empty, majestic buildings.

In contrast, there were several churches—a growing number—that represented the polar opposite. These churches, full of biblically faithful people of all ages, were literally on fire! Like Philip, they had experienced the Nazareth syndrome. It was a transforming wake-up call for me as well.

The UK is more like North America than many other global locations, where Christianity reflects growing “hot spots” of evangelistic outreach. You can experience God’s amazing growth in many places around the globe. Yet, for Americans, it’s easier to translate what God is doing in England.

As I was overwhelmed by the refreshing spiritual depth and outreach impact of those churches in the UK, I asked key leaders if I could bring American church people to “catch what can’t be taught.” In retrospect, I wanted to expose people to the Nazareth syndrome of Philip and the hands-on experience of doubting Thomas. For Thomas, it changed his life. Exposure to some of these “on fire churches” would impact North Americans.

Beyond the academic learning, the exponential impact could spread a holy infection in North American churches. And, I thought, “our Church Doctors could help them translate and apply those dynamics that would empower their churches to reach lost people for Jesus.” It would be a plan that was not just academic, but also a catalyst in which people would experience the real deal!

For 20 years, we have taken groups to England. During that time the British movement has increased, matured, and expanded. We increased the number of churches and leaders who graciously give us their time. We have become friends with world-renowned British church leaders who, personally, invite our groups into their lives.

COVID has knocked us out of our annual trip for the past two years, but we are confidently looking forward to taking a group of North Americans next September (2022). While the exposure is only a couple of weeks, the impact lasts a lifetime. If it can happen there, it could happen here.

Sometimes you have to experience something to really get it. Right, Philip? Did you get that, Thomas? Did it make an impact on you, Peter? When will YOU be impacted by the experience? When equipping yourself and others for the Great Commission, look for the opportunity of experience.

Ferguson, Dave, and Jon Ferguson. Exponential: How You and Your Friends Can Start a Missional Church Movement (Exponential Series). Grand Rapids, MI: Zondervan, 2010.

Marocco, James. The Multiplying Church: Becoming One Church in Many Locations Impacting the World. Self-published, 2020.

Thorpe, Ric. Resource Churches: A Story of Church Planting and Revitalisation Across the Nation. Self-published, UK, 2021.