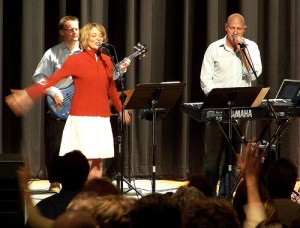 When I went to college, the approach to education was a one-sided lecture. People still learn from lectures, reading books and newspaper columns. However, whatever method you use, you want to make it interactive. Don’t you think?

What does this mean for 21st century worship services? Is interactive communication beneficial, or does it turn the sacred into a three-ring circus? Robert Schuller, in the television ministry called “The Hour of Power,” started a trend. He began worship by saying, “Good morning,” and the congregation responded, “Good morning!” That “innovation” rapidly spread through many churches. Why?

Focus on these issues:

What does your church do to engage those in worship? What could be done to make worship more interactive? Jesus did it in the first century, and evidence shows it is important today. We welcome your comments below.